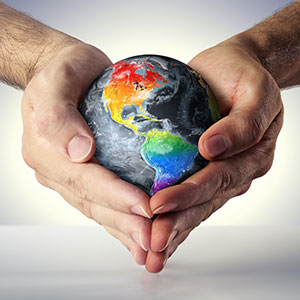 Once you start understanding the whole twin flame duality thing, and how it’s about reconciling opposite extremes to find new balance, you can see how it’s playing out a societal level in the LGBTQ and poly movements.

The world is continuously evolving, as are we as individuals and a species, and the spiritual renaissance that is starting to happen will be no different: by the end of this journey, each of us individually, as well as our society will have changed.

Probably the biggest societal changes that we’ve seen in the last couple of decades are around racism, the growth of same sex relationships and the growing acceptance and legalization of marijuana around the world.

The term LGBTQ is an acronym that means Lesbian, Gay, Bi (Bisexual), Trans and Queer/Questioning.

Over the past years this acronym has become known to us through a growing movement, spearheaded by the LGBTQ community, that is pushing governments around the world to give same sex couples the same legal rights as heterosexual couples. On the spiritual level, it’s one of the ways the twin flame duality energy is manifesting.

For many souls who are only soulmates, but still deeply spiritual and as sensitive as any twin flame, they feel the duality energy but don’t know how to react to it. This could manifest in them creating an identity conflict within themselves, leading to some of the transsexual and transvestite upsurge in growth we’ve seen.

Another spiritual explanation for the surge in trans-related cases could be twin flames who are trying to reconcile dualities within themselves – often the divine masculine and feminine.

For same sex couples, their purpose could be finding balance within an extreme, and for the more butch and feminine aspects of the couple, balancing those self same dualities within themselves, i.e. the contrast of a male exterior with a feminine interior and vice versa.

Another change in relationship trends that’s growing around the world is polyamory – in all its formats.

When I first started understanding how the back up system for twin flames worked, this surge in growth made perfect sense.

You know we always hear the universe has a plan and there’s always an alternative – well in this case it’s true. The twin flame mission is so important that there are backups – alternate twin flames and soulmates.

All of these people have come in with the same strong programming as what you’ve had all your life, and sometimes two or three or four of them have found each other, leading to truly interesting polyamorous setups. In some cases, the groupings will go as far as living together and sharing a single bed.

If you think about it, it’s pretty resourceful of the universe to do it this way, and it’s efficient too. If two people with extremes can release a burst of energy, then reconciling that between three or four people can release an even stronger burst of energy, speeding up the whole process.

Critical mass has been shown to be the square root of 1% of a population, so one person impacts 100 around them, but two impact 400, three impact 900 and four would impact 1600. By putting three or four into a relationship and the same geographic space, you get a much bigger impact – more bang for your buck if you will.

Like so many of you, I could never quite reconcile the understanding of why my sexuality is important to my spirituality – I just knew it was.

As the twin flame journey has been unfolding for all of us, I now understand the role that our strong sexuality plays, and why the finding the right relationship has always been so important to us.

Going forward I think we will see a lot more changes in relationships, family and sexual and societal structures, possibly leading to a future where we are all bisexual and have reconciled the dualities within ourselves.

In Judaism, it is taught that there needs to be a new Messiah every now and then, someone who brings new rules and new understanding. Perhaps one of the lessons of the twin flame movement going forward is that our current sexual standards are outdated, archaic and no longer serve us. Over the coming years, I won’t be surprised if bisexuality, same sex relationships and polyamory become completely the norm.

If anything, this shift is showing us that we need new rules, new ways of being and a new understanding – it’s the only way we’re going to create a new world order.

So please, cut the Caitlyn Jenner’s of the world some slack. They’re shouldering a huge part of this combined spiritual load we’re all carrying, and personally I am infinitely grateful to all of them for the awareness and platforms that they have created.