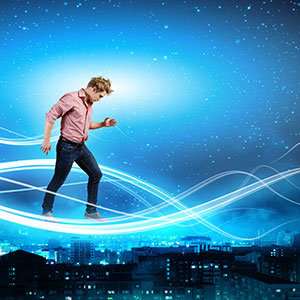 A major evolutionary stage like a Dark Night of the Soul is not something the universe gives you a heads up about; you kind of discover along the way (or afterwards) that this is already where you are.

What are some of the clues that will tell you that you’re in a Dark Night of the Soul?

You battle with the basics

When you’re on a spiritual journey, there are certain basics that everyone lands up picking up: regular communion with spirit, staying positive, clearing your energy, manifesting, meditation, forgiveness and more.

One of the ways that a Dark Night of the Soul shows itself is by blocking you remembering to do these things regularly, and even more cruelly, by making them more difficult to do. So it’s a strain to visualize your protection bubbles, your mind goes blank about what to do next, and you feel like a total noob who has never done this before.

The point of a Dark Night of the Soul is to show you who you are without resources, without help, to break you down completely so that you can be reborn anew on the other side. By blocking your usual avenues, you get to see yourself in crisis and you are forced once again to find new paths and ways to do, be and create. As a result, a Dark Night of the Soul journey will often lead to incredible new avenues of facilitating spiritual achievement, but it can be hell to go through.

Create a daily routine and keep notes for yourself. Have a reference point that lists the activities you usually do - and force yourself to stick to it no matter what.

It doesn’t always feel like the things you’re doing make any difference or improvement, but things will get significantly worse around you if you aren’t doing these basics, so don’t let them slide. Also use this opportunity to explore other modalities and tools that you can use to achieve more effective results in your daily practice going forward.

You can manifest – but only in certain areas

This is one of the cruelest elements of a Dark Night of the Soul: you can create movement and manifest, but not in the areas that you want movement to happen.

It’s the same as miracles – they’ll still be around you and facilitated through you, but they won’t happen for you during this time.

This is a very frustrating thing to deal with, because the fact that you can manifest results in one area makes you beat yourself up for not being able to create movement in another area.

I believe this serves the purpose of showing us that our powers aren’t gone during this time, but it can be very demoralizing to ask for help, put in the hours and still not see results in the areas that really matter to you.

You get just enough to survive

One of the places that a Dark Night of the Soul loves to attack on this plane is financially, because it’s the thing that’s going to make the biggest impact on your life. Regardless of the area it attacks in though, the principle remains the same: you get just enough to survive.

In the case of money, you’ll get just enough to cover your expenses, and it will often happen at the very last minute. You may go a few months late on certain payments, but the minimum amount of money you need will almost always come in to prevent a complete financial disaster.

Often it won’t matter how much you’ve been manifesting or not, although forgetting to manifest can make the situation a little tighter and more difficult. You may lose certain assets, or even a business, but your most basic needs somehow always seem to be taken care of – there’s just enough to survive.

While this is a relief in a way, it’s also really frustrating, because you’ll see a little bit of movement and you’ll follow that thread, but no matter how much you throw at it, you just can’t seem to get it to move past a certain point.

You have to surrender

There’s no shortcut through a Dark Night of the Soul, and you’re only here because you’ve faced enough trials and lessons to be able to survive this test. You’ve seen before that you’ll come through; you’ve seen that things will turn around.

A Dark Night of the Soul is time-based, and while you will still have to do a lot of digging to work through the issues being presented to you, the amount you clear will likely have no effect on the duration of your trial.

So surrender in this case is not always surrender, let go and then the energy shifts: here it’s surrender and accept that you will have to sit and wait it out for as long as the universe wants to keep you there. This will challenge your faith greatly, and you are going to see a number of sides of yourself that will shame and embarrass you, and make you feel very uncomfortable.

This isn’t an easy journey you’ve chosen to walk, and at times it is going to be so difficult and uncomfortable that you will literally beg to removed from it, but hang in there. Like everything in life, this too shall pass.

There’s no way your soul and the powers that be would allow this to happen if you did not have the ability and resources to make it through. You will survive, you will come out stronger and you will eventually thank the powers that be for a chance at this particular test.