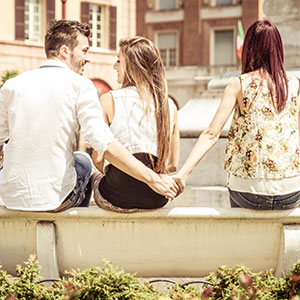 Around the world twin flame relationships are appearing and exploding – in a good way and bad.

Often though, twin flame relationships are faced with major challenges right from the beginning – why?

For a word and concept that was hardly heard until a few years ago, the idea of twin flames has become crucially important in spiritual circles, and it’s even seeping over into mainstream.

From the outset though, many twin flames are facing huge challenges, and all of you seem to think that this challenge is the thing that’s keeping you apart. In truth, it is the challenge that you are meant to overcome in order to be able to be together.

Oh and by the way: overcoming that challenge, well that’s part of your spiritual purpose; it’s what you’re actually here to do.

In order to understand how a twin flame works, you need to look at the yin yang symbol.

In essence, a twin flame is an identical twin soul. As the split occurs during creation, each of the twins carries a polar opposite of each characteristic. So one will be mostly positive, the other mostly pessimistic; one brave the other cowardly; one commitment focused, the other running away. The list goes on and on.

What’s important to understand is that the purpose of meeting with your twin flame within a lifetime is to reconcile some of those dualities because you can’t do it on your own: you’re incomplete without the dual aspect of your soul.

The reason it’s happening now is that the new spiritual renaissance will usher in new rules and ideals, including the need for us to work more cooperatively. The only way to ensure that this would happen is to make the need to work cooperatively with another being a personal driving force, hence twin flames.

A twin flame always knows that something (someone) is missing, and finding that person is priority one. Once you’ve found them you can’t walk away. In a way, it’s almost the Universe’s way of shortcutting the evolution on this planet.

If we can create a populous of twin flames who actively work together on stuff, that will spread over into communities and within a generation or two we can turn this tide around completely, because people will be automatically programmed to work with each other instead of competing against each other.

Dualities are meant to be big

The problems that you face in your twin flame are meant to be big, so they’re as big as the universe can make them. I almost get a sense that we were picked because we had such big extremes to reconcile.

The more extreme the polarity is, the most energy is released when it is reconciled – that energy is what the universe is after. The farther the extremes are, the more powerful the energy is that is released.

Those bursts of energy – on a lot of levels – are a big part of what restores balance to the world.

Now it starts getting interesting, because here we leave the realm of global twin flame energy and move into the personal stuff that has to be dealt with.

I can’t give you examples from clients, but I can give my own example: within literally a couple of weeks of my twin flame and I finally getting together and formally committing to a relationship, his ex-girlfriend pitched up with a toddler that she claimed was his child. Yes that sent my relationship into a tailspin.

The universe was also kind (or cruel?) enough to show me our last lifetime – and then have it confirmed by my BodyTalk Practitioner and a phenomenal psychic. So I understood the karma at play.

Basically the choice we were facing is the choice just about all the twin flames are facing right now: responsibility and money vs. love and happiness.

In our particular case we’re on lifetime six with this issue, and so the lessons have to be big. This lifetime it now requires one of us to move halfway across the world in order to be together, and the souls who were his wife and son in the last lifetime are the same two souls appearing as the mother and son this lifetime. The lesson is just way harder and any decision is monumental.

I’m seeing a lot of twin flames speaking about meeting their flame and the person is married, or there is some other huge block that is keeping them apart: that’s what you’re meant to overcome, and the block and lesson severity is also going to be determined by how many times you’ve failed at this lesson karmically.

Remember the more extreme the dualities you reconcile, the more powerful the energy is that’s released. Basically we were chosen because we have hectic karma to overcome.

So yes, this may mean that one or both of you has to get a divorce in order to be together. Or you have to overcome an internal block around cheating and what it means to you. The lesson is going to be personal, but exploring it can unlock the key to solving your problem.

You’re effectively in a way being forced to think about and approach this spiritually, so that you start the process of the world thinking from a big picture spiritual point of view. It’s the only way we’re going to break the hold of the invisible boundaries that hold everyone in place: they need to see for themselves that a bad experience can be a good decision and that change can be painful, but it’s worth it.

The Essene Mirrors of Relationship

The last thing that is going to feature in your connection are the mirrors of relationship: basically your personal stuff that you need to develop, and how that is reflected to you by your partner.

The mirrors of relationship, originally based on the Essene Mirrors, basically show you who you are; what you judge, fear, hold in awe or carry an energetic charge around; what you’ve lost or compromised; your expectations and programming; karma, fears, active memories and generational patterns; and conflicts, complements and dualities.

While twin flames will be attracted to each other for different energetic reasons, i.e. the twin flame bond, they will still have mirrors to clear with each other.

If it is your real twin flame and you clear the mirrors, you’ll clear away the irrelevant issues that are getting in the way of your real stuff. You’ll remove a lot of the more minor irritations and be left initially with the one big initial reconciliation.

I’ve created a number of free resources on my website for lightworkers, lightwarriors and twin flames, including a mirrors process tool: http://bit.ly/lctmirrors

Please go use them and before you panic about your twin flame, clear the mirrors. It will relieve a lot of the energetic stress and chaos you’re currently feeling, and put you in a much better space to tackle the complexities of your twin flame.