Working in the holographic field 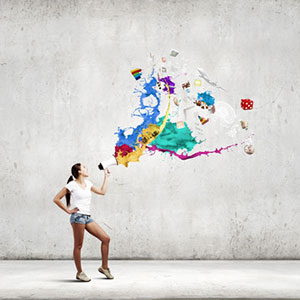 Working in the holographic field and how it impacts our personal development and spiritual growth work.

Kinesiology, the muscle testing mechanism used in sports science medicine, really changed the playing field for human consciousness and personal development, as explained by Sir David Hawkins in his book, Power vs. Force (1994).

Most notably, kinesiology showed that there is a field of thought that connects all of us and we are collectively plugged into that accumulation of knowledge at all times. Basically it’s like your brain is a computer, connected by wifi, to the Internet of all knowledge that has ever been.

This field, known as the holographic field, contains every thought that has ever been thought and we already have access to it through our natural body mechanisms. In fact, the holographic field is the very premise of kinesiology: you can test for elements using muscle testing because the information is already available to every living being that exists in the field.

One of the amazing ways in which this theory was proven was mass muscle testing across thousands of subjects, all of whom returned with the same calibration results for positive and negative items, as well as standard rankings according to the scale of Human Consciousness.

The Human Consciousness Scale, as published in Power vs. Force, is a calibrated scale showing human consciousness and evolution, ranging from 0 to 1000, where you’ll find figures such as Christ and Gandhi.

Most people operate and live from a level below 200 and never rise more than 5 points across their entire lives.

The Human Consciousness Scale was complied by muscle-testing the various calibrations across thousands of participants in blind scientific trials. The calibrated answers were found to be consistent across all these persons kinesiologically, even when they personally disagreed with the information presented.

A key lesson you can garner from this is that truth is truth and there is an objective answer that does not stem only from your level of understanding.

If this holographic field of information exists around us, it stands to reason that it only exists because we are broadcasting our energies into it, feeding it with our thoughts and emotions, so that they too become part of the collective.

The famous example goes: There are two monkey populations of the same species, on two islands separated by a body of water that can’t be crossed. One day one, one monkey on one island will go down to the water and wash his fruit before eating it. The next day he’ll be mimicked by a few other monkeys who have seen him washing his fruit, and each subsequent day he’ll be copied by a few more.

On day 10 however, something amazing happens and both monkey populations on both islands will be washing their fruit before they eat it, because we’ve reached critical mass and that information is now available to every monkey in the field.

The Kardashians are a great example of how this plays out globally: even if you didn’t watch the show or follow them in media, somehow you know about them and who they are.

A key understanding you can take from this is that information is going to come to you simply because you’ve changed your vibration.

You don’t need to read every piece of material and garner every bit of information, that information will become available as you reach new levels of awareness. It’s only important that you keep clearing the stuff that prevents you from accessing it.

Another key life lesson from this is that the people around you are going to impact and change you.

If someone around you is miserable and complaining all the time, that energy will drag you down to lower levels so that you’re operating from a lower level of consciousness.

You are the sum total of the energy of the five people you spend the most time with. How are the people around you feeding you?

Critical mass has been shown to be the square root of 1% of a population through research done into prayer and meditation.

Critical mass in the holographic field is the tipping point of information availability in the field because it enough people know about it and their energy projects that knowledge into the field. There are two useful pieces of information you can glean from this.

Being alive and conscious is enough to make a worthwhile contribution to the world.

Simply growing your own knowledge will impact the field and make the world a better place, even if you do nothing else.

Working with someone else increases your power exponentially.

If you work critical mass backwards, then one person impacts 100 around them, but two working together impacts 400 people. Basically, working with someone increases the power of what you’re manifesting or healing fourfold. Work with two people and you’re 12 times more effective in your immediate reach.

Anchoring in the Holographic Field

When you start personal development, energy and spiritual work in the beginning, it’s often with a sense of awe and wonder that people are at that level.

When that awe happens and you contrast their experience to your own life, it’s easy to make the leap that you don’t know how to do be that naturally and so it must be difficult or complicated to get it right.

The idea that you need complicated tools in order to create spiritual and energetic change actually holds a lot of people back from developing properly, because they dismiss ideas on their simplicity. The truth is that every mechanism for spiritual and personal development has to be able to occur naturally; otherwise the majority of people would never grow at all.

So if you want put something into the field for healing or manifestation, or remove it for clearing, simply say it out loud. After a while you’ll begin to feel the difference between something new settling in and an old block, pattern or memory releasing.

Putting it all together

You can use knowledge of the holographic field to enhance and expedite your growth curve.

From affirmations to prayers, don’t internalize your thoughts and feelings – say them out loud and put them out there.

Work with a healer or coach so that you have a mirror to reflect back to you.

Working with someone, whether a team or a healer or coach, will anchor your stuff into the field faster and more permanently.

One of the reasons for this is the belief of the healer that you will be healed – you step into the morphic resonance of their belief. The same applies to your goals: your coach or healer can hold a stronger belief that the goal will realize because they don’t have the emotional blocks that stand in the way.

Every person you speak to and collaborate with will add their belief to your goal until it becomes a certainty that you will reach it, because the combined energy is in the field.