It always boils down to forgiveness!

When you’re dealing with any situation that you need to work through, you always have to reach forgiveness at the end, whether you’re forgiving someone else, God, society or yourself.

By skipping to the end you shortcut the amount of time you’ll spend on an issue, and the energy you’ll waste trying to understand it and figure it out.

When you really forgive someone or something, understanding the ‘why’ of the situation and what really happened won’t matter to you anymore – the act of forgiveness relieves the relevance for you.

So this means you don’t have to waste hours, days, weeks and months running it over in your head and trying to understand: the moment you let go it won’t matter to you anymore. 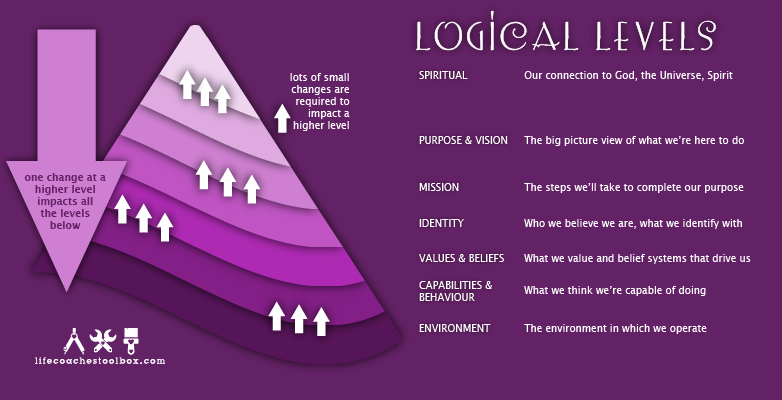 In every pyramid model that you see, the general rule of thumb is that it takes a lot of movement and energy on a lower level to create one small change at a higher level. The reverse is also true: a change made on a higher level will clear away blocks and issues on lower levels.

By changing the energy of the situation purely on a spiritual level you take away the problem behaviors, beliefs and identity issues on lower levels. Even dealing with people in that environment will be easier, and you will find that you have more faith in your abilities to handle the situation overall.

You know how it’s difficult and tense to be around someone when you are carrying an issue with them – and how you can feel it even when you aren’t around them? Forgiving the person will clear that energetic tension.

The moment you’ve removed the relevance of the situation through your forgiveness, you’ll find that it’s easier to deal with the person in question.

This doesn’t mean you have to let them back into your life, it just means you give yourself a break from thinking about it nonstop and you won’t be tense and uncomfortable if you have to be around that person.

Forgiveness is an incredible tool for releasing yourself from the trap of karma.

The law of karma basically states that every action has an equal and opposite reaction, so if you do something good or bad, that same energy is going to come back to you again. But basically that makes karma impossible to escape.

Even if you are redressing karmic wrongs from your past, those don’t always happen with the same people, because the energy lies in you. So you can get trapped in karma by doing a lot of good and having good karma due to you. The trick is to get out of the karmic cycle completely.

Because the energy of the incident is purely your karma, and can be redressed by your interacting with someone else to redress that balance, it also means that you can release your side of it alone, simply by using forgiveness.

When you no longer hold onto the energy that somebody owes you in some way, you release the karma that would come to you to rectify that imbalance, meaning future events in this and other lives now no longer have to take place. With every forgiveness release you release more and more of the karma tying you to this plane, until eventually you are free of all attachments and able to reach ascension.

On the immediate karmic level, forgiving a situation means that you are freed of that energetic cycle and you don’t have to repeat that lesson again within this lifecycle.

Often, when you are stuck in a cycle where the same kinds of patterns and people are repeating, a forgiveness release is the leverage point you need to create movement.

Get out of the misery

If you’ve ever done an intense gratitude or mantra exercise you’ll know the powerful emotional and energetic surge that kicks in after a while – it’s literally like being on a high.

When you overload your system with forgiveness it achieves exactly the same thing: all of a sudden you will have this surge where you feel exponentially better on every level.

This has nothing to do with releasing the other person at all, it is literally just the repeated exposure to the words that sends your body soaring with joy.

This makes forgiveness a powerful tool to use in any situation, and it’s way more accessible than gratitude when you’re sitting at the bottom of a mental and emotional pit.

Once you start working with a tool like Mirrors of Relationship, it can get addictive quickly - especially as you begin to see results, and changes in the way you think and feel.

So, you might suddenly realize you want to go even further, and probably faster, or you've hit a major stumbling block that you need help clearing, or you are in shifting overload and experiencing physical, emotional and mental symptoms you need help with. That's what this section is for!

Simply pop us a message - or reach out via one of the message services listed below - and we'll have a coach or healer get back to you to assist you. This is a paid for service.