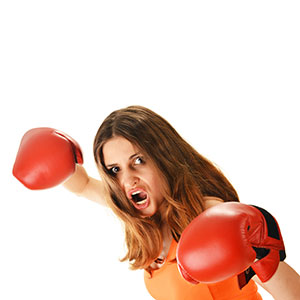 Okay so you pushed the red button... and this is a real emergency!

You are your wit's end, and unless you get some sort of assistance things are just not looking good.

That's what this resource is here for.

Surely anger is not a healthy emotion, so why would we want to get angry?

If you go take a look at the Human Consciousness Scale, what you're going to notice is that guilt and humiliation, where we lie when we're suicidal and depressed, is right at the bottom of the scale, resonating between 20 and 30.

Anger, on the other hand, sits significantly higher - at 150 in fact.

So when you're at your wits end and really don't know what else to do, simply getting yourself as angry as possible will help lift your mood enormously, and can be the catalyst you need to shake you out of a funk.

When you're busy being furiously angry at someone else, you're not busy taking it out on yourself, and you're much less likely to harm yourself.

So let's get you... Fighting Angry!

Right up front you need to know with this that it's always easier to ask forgiveness than permission.

Chances are you may have to go say sorry later, but you can live with that. At least you'll be around to do it.

There's usually somebody around who you can get angry at, somebody you're currently angry with.

If the idea of aiming this at one person is too much for you, or you can't think of someone, then use the list of typical stressors below to remember annoying and frustrating events from your life that you can get angry about.