Why cheating, infidelity, betrayal and jealousy hurt so very much 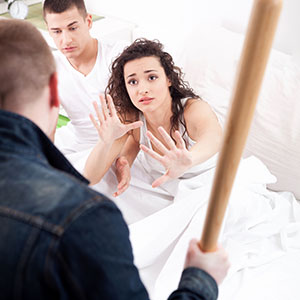 What causes the pain of jealousy we feel in sexual and romantic infidelity and betrayal?

So the journey for me is really about moments like this, when you receive a revelation of information so profound, that ties together so many loose ends, that brings so much internal peace, that you just cannot deny it.

Bear with me, because this requires some background.

The urge to Oneness & Sexual Attraction

The urge to oneness is the pull we feel towards God/Source/something greater.

Among people, with the paradigm blindness the limit of our physical experience places on us, we by default believe that the highest form of closeness we can achieve is physical closeness.

So when we want to be close to someone, really close, we feel a pull to touch, which at the deepest levels becomes sexual.

This is also why so many spiritual teachers and leaders are seen as ‘sexy’ - you’re feeling the pull to God/Source through them, i.e. they express or manifest the pull to Source for you.

Because you place physical reality above your mental and emotional experience, you by default assume that the intense longing is a sexual pull - because you can’t think of anything else that would pull you that strongly.

Okay now part two… the experience on Earth is about souls knowing themselves as separate and individual, with their own personal identity.

Basically, each human is as close to a God as a soul can be, without being an actual God.

For a lack of a better analogy, we are complete God potentials.

Each of us has the potential to be a God, and that’s why we have this concept of Ascended Masters and Ascension - we can reach that level from this identity we hold now.

However we are already born with everything in place - like boys and girls are both born with arms and legs and skin and hair. There are basic underlying principles that exist.

In this case, one of those principles is that we are mini-Gods and that we reign supreme in our thought reality or internal world.

Granting someone access to that inner sanctum (i.e. a close personal relationship like romance), is the equivalent (on a smaller scale) of God allowing you to enter His presence and grace.

So granting someone right of access in a close romantic bond is the human equivalent of God granting you grace to enter his presence.

The closest possible step you can therefore grant as God of your own universe, is the urge to oneness pull of sexual attraction.

So the closest you can allow someone to see you as God (in your mind), is to have sex with them. That’s what makes sex feel sacred.

The Betrayal of Jesus Christ by Judas Iscariot, the Son of Perdition

“The Son of Man will go just as it is written about him. But woe to that man who betrays the Son of Man! It would be better for him if he had not been born.” (Matthew 26:24)

When Judas betrayed Jesus for thirty pieces of silver, and then chose to kill himself afterwards, he became a Son of Perdition. A Son of Perdition is an unredeemable soul in the eyes of God.

The soul becomes unredeemable because this person has stood in the glory and grace of God, has seen God’s salvation, and still chosen to turn away from God towards the world.

Judas saw Jesus’s miracles and chose to betray him for 30 pieces of silver. He then further ensured his damnation by not returning to God to ask for mercy, but instead choosing to take his own life.

Tying it all up... the recursion of pain and jealousy in infidelity and betrayal

When you allow someone to experience you sexually, you are allowing them as close to your God self as is humanly possible - at least in the experienced reality of most who walk this plane.

When they reject you after having had shared that presence with you, having had seen your glory, it feels like a massive betrayal. It’s such a big betrayal in fact, that even God doesn’t tolerate it.

This is where we get the idea of God is a jealous and vengeful God.

If this is going to ruffle God’s feathers and make you unredeemable in His eyes, of course the recursion is going to feel unforgivable in the human experience too.

It is such a deep betrayal that even God says: “...woe to that man who betrays the Son of Man! It would be better for him if he had not been born.”

Marriage and romance are deeply spiritual entities - and they are recursions of our relationship to divinity. They honor the divinity in us.

When we experience betrayal sexually it triggers wild and horrible emotions…. and now you finally know why :)

Enjoy the revelation and release!! I know I certainly did!!